One perplexing problem that occasionally arises during long extrusion and calendering runs, especially with opaque, pigmented or filled compounds, is plateout – a term used to describe the buildup or deposit of incompatible material on the screw, in the die, on embossing rolls,roll take-up equipment or sizing sleeves.  In time this deposit affects the surface finish of the product, and also provides sites for sticking – leading to degradation.  Production down-time for clean-up is then necessary. All the factors responsible for causing plate-out are not fully understood.  It is believed that minor incompatibilities of additives are partly responsible but not the whole cause.  Changes in type and use levels of lubricants, fillers, pigments and stabilizers, as well as changes in processing conditions (speed, temperature) can affect the severity of plateout – for better or worse. Even the weather (high humidity) has been known to aggravate plateout!  Although plateout may occur in a clear formulation, most plateout incidents seem to happen with opaque, pigmented or filled compounds. Invariably, a combination of two classes of metals are usually present in plateout – prone compounds – alkaline earths (calcium, magnesium from the filler or barium from the stabilizer) and heavy metals (most commonly titanium from  titanium dioxide pigment, also lead and cadmium from stabilizers or pigments).

Several empirical approaches to the control of plateout have evolved over the years, which have shown varying degrees of effectiveness:

The test compound, containing DuPont’s Wachtung Red pigment(notorious for showing plateout) is processed on a two roll mill, and the sheet discarded, leaving any plateout deposit on the rolls. A high TiO2 containing white “scrubbing” compound with abrasive silicate filler is then processed on the same two roll mill, removed, and the degree of “pink” indicates the degree of plateout in the test compound. The picture shows how PVC resins and stabilizers can affect plateout. 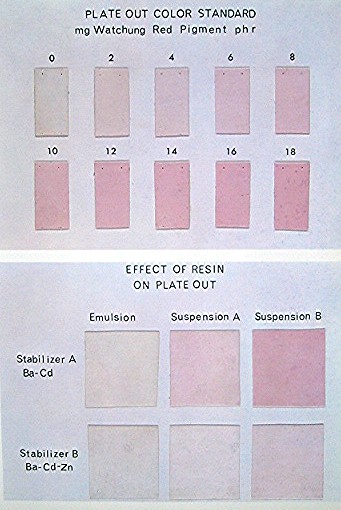